Have you ever met someone with an artificial limb? Chances are you have; without even knowing it. Modern prostheses as artificial limbs are properly known, work so effectively and it looks so convincing that you wouldn’t even know someone was wearing one. There are different types of prosthetic legs and arms. People with prosthetic legs can also climb stairs, walk, swim, and run as well as though they were using their natural limbs. While prosthetic arms and hands have advanced to the point where they give individual control of all their five fingers, you might think they’re boring. But prosthetic limbs are among the world’s truly great inventions of this modern age. By boosting independence, they boost optimism as well and both these things dramatically improve people’s lives. Let’s take a closer look at how these amazing devices work! 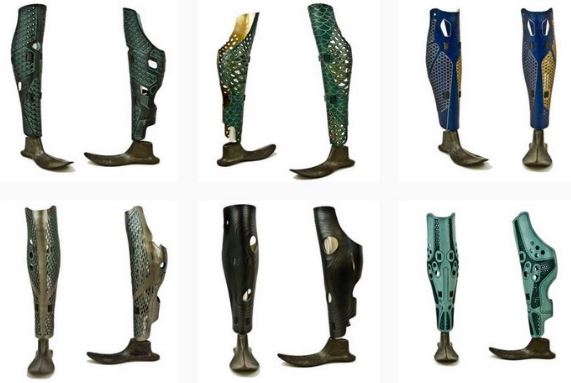 The construction of a prosthesis depends largely on the job it will be performing. While cosmetic hands are concerned purely with physical appearance, prosthetic legs are the substitutes for a major structural part of someone’s body. They have to be designed to bear the entire weight. Typically, a prosthetic arm or leg is made from a strong and durable but also a lightweight material such as carbon fiber. The lightweight material is covered with foam padding for comfortability or a flesh-colored plastic. The weight of prosthetic limbs is an important factor. We don’t usually notice how much our limb weighs because they feel so natural and seem to be moving themselves. However, if you consider that your two legs amount to thirty to forty percent of your total body weight. Your two arms about ten percent, you can see why prosthetic limbs need to be much lighter. You’d quickly get tired moving prosthetic limbs that weighed as much as natural ones. However, a secondary sports prosthesis may look much different.

The socket is the main transitional piece of equipment connecting your prosthetic limb to your residual limb. Updated sockets, developed from plaster casts or from imaging technology of your residual limb may be needed from time to time in order to accommodate your body’s changes. The kind of socket that is used with the prosthetic limb in terms of both design and materials depends largely on whether it is a BK (Below the knee) or an AK (Above the knee) prosthesis.

Sockets are often part of the overall attachment mechanisms securing the prosthetic limb to the residual limb. Sometimes, sockets serve as part of a sleeve or harness system.

There are various prosthetic knees on the market these days. A manual locking knees provide a good overall degree of stability. The more sophisticated microprocessor knee automatically senses degrees of walking or running speed.

Prosthetic feet will also be determined by your physical capacities, as well as your lifestyle challenges. The degree of complexity ranges from a basic solid ankle/cushioned heel type to dynamic response feet. which are mainly keyed to the energy level of the user.

Natural limbs are pulled back and forth by muscles stimulated from our brains. In a similar method, the simplest functional prostheses are operated by systems of cables that run through them. They perform the job of the various body muscles. One common type of prosthetic hand is a pincer. A pincer is sometimes worn inside a glove for cosmetic reasons. It can be opened or closed by pulling cables attached to the opposite shoulder. Simple artificial legs work largely through the concept of gravity. The wearer learns to walk in them through practice by alternately swinging them into position and then balancing on them while they move their unimpaired leg in its turn. More sophisticated type of prostheses are electrically controlled and powered by rechargeable battery packs.

Technology is only part of the story. Getting used to a brand new part of your body is a physical and psychological challenge involving a partnership between the patient and their prosthetist depending also on the type of prosthetic the patient is on. This hugely important person works with you at every stage of the process, from choosing the best prosthesis for your needs; through the process of measuring, manufacturing and fitting. Help in learning how to operate your new limb and tackle new challenges such as taking up a sport or activity in school/college will be provided.