Making a career out of film-making is one of the hardest things most filmmakers had to do.Getting hired for the first time is what is particularly the hardest part or any job seeker. However, knowing what exactly to do as a beginner is probably what will get you ahead in film production. 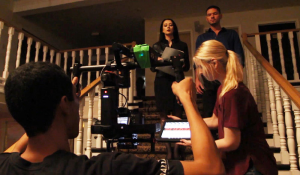 On that note, below are other things you need to get started and be successful at film production.

Knowledge is power. This statement couldn’t be more true.

As a film producer you should be conversant with the various technologies used in the creation of films. For instance, you should have in-depth knowledge of vr and ar production, what effects different camera lenses can achieve, as well as where a camera should be positioned to capture a desired angle.

Also, you should be an improviser! Improvising will help you tackle unprecedented difficult situations on set and also help you stick to the allocated budget. Even movies with a budget of a couple of million dollars will feel like their budget is not enough. As such, a producer has to be creative and improvise.

It is a sad fact that the film industry is difficult to break into. There are only few slots for new people because executives and film production companies prefer working with people they know.

They do this because, usually, with a person you know, you are aware of their personal traits, strengths, weaknesses and are sure they will work well with your team. That is why networking is vital in the film industry.

To make it in film production, you have to expand your network. Go out and socialize. Beginners are urged to start small. It could be friends of your friends or your parent’s colleagues. Just don’t exclude anyone because you might not know the influence or resources they have. They might be able to introduce you to someone who works in a theater, the media, or wherever. The point is to keep networking until you get someone who will help you land your dream job.

You will be surprised at how many executives in renowned film production companies started off as volunteers. It may not be for job purposes, but heck, even Angelina Jolie has done and is still doing volunteer work in more than 20 countries around the world.

Especially if you are inexperienced, volunteer will help you demonstrate your skills and abilities. After doing this, the next step is to make yourself indispensable!

To make this work in your favor, be specific about your boundaries. Explain that you are not there to fetch coffee or run errands. Instead, be clear about the value you are in need of from them. Good luck!