Since the days of colonial India, when two culinary cultures came together, adapting ingredients, recipes and cooking techniques to suit two different tastes, Anglo-Indian food has thrived. On the one hand, classic British recipes such as roast dinners were given an Indian make-over with the addition of interesting spices and chillies. On the other, traditional Indian recipes were tweaked or adapted to suit the British palate, resulting in dishes such as mulligatawny soup and coronation chicken.

However, in more recent years, the fusion of Indian and English food has become increasingly sophisticated, with innovative chefs creating adventurous dishes that now grace the menus of some of London’s best Indian fine dining restaurants. Yet some of us not only find it hard to part ways with our ‘usual’ Indian order, we also might be surprised to learn we have picked a dish that has been heavily Anglicised and isn’t a traditional Indian delicacy at all.

Take a peek at some of these popular Indian options and perhaps next time you are temped to order a dish off this list, consider choosing the more authentic, Indian alternative instead…

ALSO READ:  What Are The Effects Of Vitamin D On The Human Body 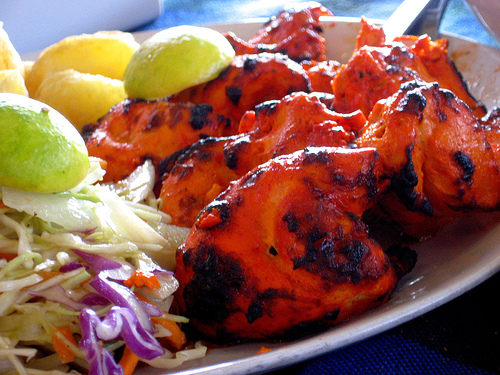 According to The Independent, chicken tikka masala was the most popular order in British curry houses for around a decade and has only recently been overtaken by jalfrezi in the hearts of the nation. However, this controversial dish is actually believed to have originated right here in the UK – hardly the exotic, Indian speciality some people might believe.

Swap it instead for a dish with real Indian roots – the chicken tikka. Juicy chunks of chicken are marinated in yoghurt and spice before getting the tandoor baking treatment, a cooking tradition that originated in the Punjab.

Instead of Naan on the Side… Try Rotis

Naan bread is a typical curry house accompaniment, ideal for soaking up the sauces of your main dish. However, the extent of its popularity in India has been exaggerated due to its widespread usage in the curry houses of the UK.

In fact, if you were to visit the home kitchens of India, it is much more likely you would find rotis, a flat-bread that’s eaten at all times of day, including breakfast and as a snack. The naan, in comparison, is much thicker and heavier, designed for consumption with a heavier evening meal only.

Instead of Samosas… Pick up a Dosa

Everyone loves a tasty samosa, These fried triangles of dough, stuffed with all manner of spiced potato, vegetables and/or meats, are often to be found amongst the deep-fried Indian snacks that serve as starters in many curry houses. But samosas are so last season; the new ‘big thing’ are dosas – a form of Indian crepe, stuffed with tasty fillings. Dosas are experiencing a huge surge of popularity all over the world due to their delicious and versatile nature.

Mango chutney was one of the first Indian chutneys to be adapted, packaged and sold to consumers in the UK. Instead, why not opt for the much more exotic tamarind chutney? Sometimes referred to as the ‘ketchup of the East’ this tangy, spicy chutney works well as a condiment for all manner of different foods. Go on, give it a try!