It’s not many people who have the sheer influence and clout to spawn a word from their name, but Zurab Tsereteli is one of their exalted number. He’s an artist rather than an architect, planner or politician, but his vision and his force of will has caused huge changes both to the character of Moscow and to the relationships Russia has with the world at large. Some decry Tseretelization, some are convinced it’s elevating Moscow to premier place among world capitals, but everyone in Russia is talking about it.

But just what is Tseretelization, and who is Zurab Tsereteli? How does he come to have so much influence?  Today we’re answering those questions.

Now in his 85th year, Tsereteli holds the crown and sceptre and sits on the throne of Russia’s artistic world. He’s the head of Russia’s own Academy of Arts, so he has  a huge influence over upcoming young sculptors and painters, and the teachers and academics who educate them and archive the unfolding story of Moscow’s artists.

ALSO READ:  Why Are E-Bikes Still Popular in Both Developed and Developing Nations?

He’s also opened at least two museums – the Museum of Modern Art in Georgia’s capital Tbilisi and his own gallery and workshop in Moscow. Here visitors can see some of Tsereteli’s best works on display, and also witness the man at work: even with his august position, he still creates his own work. For artists, retirement isn’t really a concept!

He made his reputation with a project to take art to the masses with a series of bold, surreal bus shelters across the Abkhazia region. The success of this monumental, sculptural project set the course of his career: cooperating with governments and big bodies on large scale art that makes an impact on a global scale.

It’s this sensibility that has Tsereteli has brought to Moscow’s skyline: his combination of artistic nous and reliable delivery have made it natural that he should have a good relationship with politicians and civil authorities looking for an aesthetic vision for the city and he has, in turn, remade Moscow! 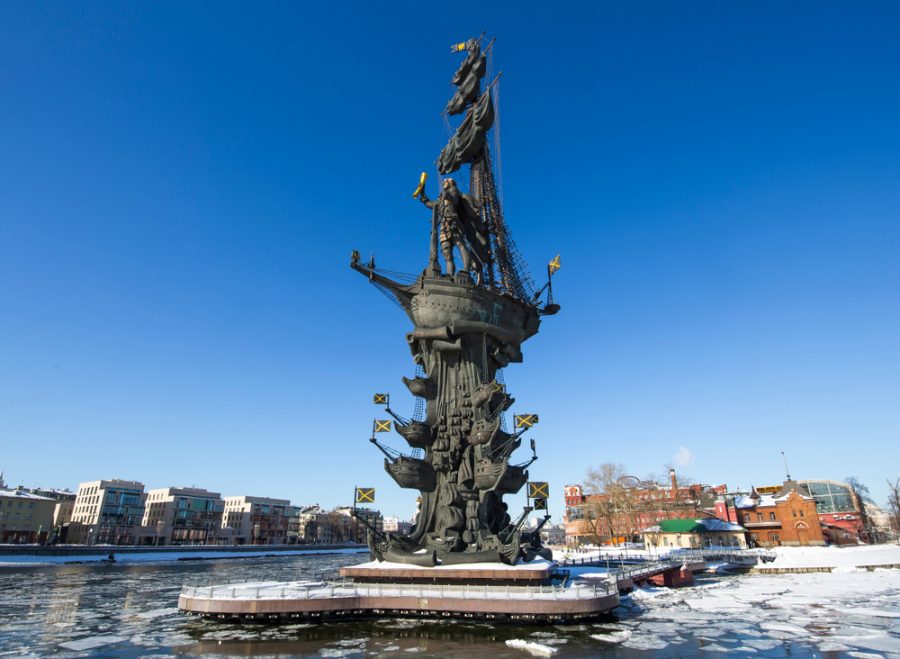 His statue of Peter the Great dominates the sky-line downtown: it’s the eighth largest statue in the world, and it’s a bold statement uniting Russia’s contested past with its bold, bullish future. Similarly huge in scale is the roof of the Moscow International House of Music, which holds a Tsereteli original: a huge treble clef, covered in gold mosaic pieces which revolves in the wind like a weather vane.

Tseretelization is scale, boldness and ambition. Some criticise it for a lack of taste and refinement, but it stands for confidence and optimism, and a commitment to using art to bring atmosphere and modernity to the city!